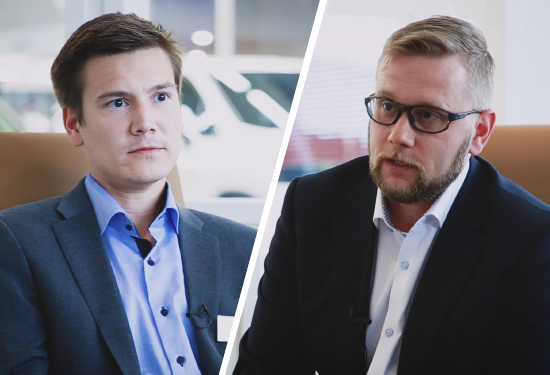 Finnish importer and retailer of the Japanese car manufacturer.

During the last few years, Toyota Finland has put more effort on B2B sales. To support this effort, they’ve started using Vainu. For Toyota, Vainu is more than a system provider. “Vainu provides us with a prospecting tool, and the team shares their sales wisdom with us,” says Jussi Granberg, Field Sales Manager.

In Finland, Toyota operates through an importer and 54 retail stores. Before the company started using Vainu, new prospects were primarily found through static lists of companies close to the stores within target industries. These lists were created by the importer for the retailers. Sales reps went through the listings, and according to Granberg, they often weren’t too happy when the job finished: The lists were outdated, included duplicates, and were mostly frustrating for a rep to use.

With Vainu, retail stores can now do the prospecting work individually, which has sparked the long-lost joy of cold calling among Toyota sales reps.

Tommi Juuma is a successful sales rep from Toyota's retail store in the city of Raisio and is portrayed by Granberg as a professional and hardworking modern salesperson. For Juuma, Vainu provides a more natural way to get in touch with the customer. “The person on the other end of the telephone line pays better attention to what you have to say when you've knowledge about their company.” One time, Juuma noticed that a certain company was looking for a new employee and gave the company manager a call. “It was an easy way to start the conversation by asking how this new person is going to travel to all her meetings,” Juuma says with a smile on his face.

Overall, Juuma is happy with the versatility of the prospecting tool. One time, they were looking for a specific kind of construction companies close to their store. “We draw a circle on a map in Vainu that was 25 kilometers in diameter. Then we filtered out all but construction companies that have less than 5 million in revenue and less than 25 vans. The list of companies included only companies we needed to find with zero exceptions,” Juuma recalls.

Granberg, who works for the importer, works daily with Vainu to find target groups to share with retailers. One of the many ideas was to offer service packages for local companies that own Toyotas but don’t actively maintain their cars at Toyota stores. “First, we imported all the active customers to Vainu. Then we searched for all the local companies that have Toyotas and excluded all the active customers, resulting in a list of potential customers that we should give a call,” Granberg chuckles.

In another case, a deal once deemed lost was resurrected. “There was a prospect our sales rep had spoken with earlier, and according to the rep, the prospect had chosen to work with a competitor. To our surprise, Vainu vehicle data revealed that they hadn’t acquired cars from competitors either. The rep gave the company a new call which resulted in a multi-vehicle sale. This was especially great as this was one of the smaller stores which rarely received deals as big as this”, Granberg recalls.

“A veteran sales rep with a 30-year career said he has never seen software as spectacular as Vainu.”

Vainu is more than a spectacular tool

Vainu is a tool to help both sales reps and managers alike. Juuma estimates that he saves up to 80% of the time spent on prospecting by using Vainu. “Without Vainu, I would need to visit the company website, YTJ (Finnish Patent and Registration Office), different social media, and also get details about the company's vehicle database. Now it’s all available straight from Vainu,” Juuma sums up.

Granberg reveals that the cold calling hit rate (less than 10% before Vainu) has more than doubled after the sales reps started using Vainu. “It’s magically high, something like 23%,” Granberg says and sums up the interview by quoting his colleague: “A veteran sales rep with a 30-year career said he has never seen software as spectacular as Vainu.”

The collaboration between Toyota and Vainu is more than that of a platform provider and user, as Vainu also helps Toyota develop their B2B sales. The way Vainu does sales has impressed Granberg from the start. Toyota Finland is one of the companies that got a spot from the first Vainu Academy, which is a four-part sales training program. Company representatives have only been to the first of the four sessions but are already enthusiastic. “We were impressed by the Vainu playbook and the atmosphere at the Academy. We listened carefully, and think it was an excellent idea to take part in this. The next thing to do would be to figure out our ideal customer profile...” Granberg states.

“Without Vainu, I would need to visit the company website, YTJ (Finnish Patent and Registration Office), different social media, and also get details about the company's vehicle database. Now it’s all available straight from Vainu.”

Telecom 201+
Telavox increased its sales by 24 percent in 2020 by using real-time company data from Vainu. Read on to find out how.

Vainu has made us see the value of unique data points that help us be more relevant than our competitors. We already know how we add value for our customers, but the timing has been a hard nut to crack–that’s where Vainu comes in and gives us good prospects to contact at the right time.

Vainu is clearly the best comparable software I've ever used. In less than one month our investment reached positive ROI, and in less than 9 months we gained 350 new customers – all of them practically from Vainu.

We were impressed by the Vainu playbook and the atmosphere at the Academy. We listened carefully, and think it was an excellent idea to take part in this.

We've become substantially more effective in finding and qualifying prospects. Instead of tens of sales reps using a lot of time browsing several websites, we get up-to-date company lists and a good idea about any company's potential in a few minutes using Vainu.
Read more

IT 11–50
Read how CloudSuite spends 40% less time prospecting and has booked two times more meetings than before with real-time company information.

Vainu has been the right solution for us. What Vainu excels at is consolidating all the necessary company information in one place.

Construction 11–50
Read how Labroc spends 3 times less time in sales prospecting by tapping into automation and fueling their CRM with up-to-date company information.

Our transformation was about establishing a crystal clear goal and a routine for our sales. The insights provided by Vainu's data are inseparable from our sales process and fundamental for the team's success every day.

By enriching the company profiles directly in our CRM, we are now able to put real-time information directly in the hands of the salesperson. Vainu helps us prioritize our activities and to be more productive.

All the information needed for the first customer encounter can be found quickly in one place.
Read more

IT 201+
Read how Greenstep uses Vainu's real-time company data for lead generation and qualification and creating personalized sales and marketing campaigns at scale.

What differentiates Vainu from its competitors is the simplicity of the UI, the scope of the data, and the easy-to-use API that serves well in building complex solutions. Vainu also provides good sparring and consultation.
Read more

When we get a scent of a customer, we are fast to react and use the data from Vainu to tailor an offer to fit the particular customer and their current situation.

All our sales prospecting in Finland, Sweden and Norway is done through Vainu and our employees are nuts about it! Everyone uses Vainu and it is a part of the onboarding process of every new salesperson.

Staffing 11–50
See how Consultify managed to diminish the time they spend on sales prospecting with 90% thanks to Vainu.

Previously our salespeople could spend a whole day on prospecting. Now all that's needed to get the same job done is one search in Vainu. We find better prospects while spending a staggering 90 percent less time on prospecting.

Construction 201+
Learn how Vainu helped Cramo to save up to 80 % of the time spent on sales prospecting.

At the beginning of the year we recruited three new sales reps to solely search for new business and they have closed new deals worth 5 million euros with the help of Vainu.

Online Marketing 1–10
Learn how Content House finds 50 qualified leads per week with the help of Vainu.

Earlier I could have spent a whole afternoon finding a list of 100 prospects. With Vainu, I'm able to get the list instantaneously with a few clicks.

We've grown 300% year-to-year so far, and without Vainu, it would have impossible to do that.

Retail 201+
Learn how Vainu helped Gigantti to increase their B2B-revenue more than 20% two years in a row.

I think it's fantastic that Vainu develops continuously and I think there are many ways of using Vainu that neither party has yet realized.

Consulting 51–200
Learn how Berggren monitors buying signals from their 4,000 customers with Vainu.

Vainu is a genuinely useful tool. I've recommended it to many colleagues in other companies, and many of them have chosen Vainu.

Consulting 201+
With the help of company information provided by Vainu, digital agency Columbus set up a new strategy for creating targeted campaigns to its ideal customer profile by enriching contact data in HubSpot CRM.

Soon after starting to use Vainu, we won a public tender which translated into a large deal. The fact that we were even involved in a deal like this gave us enough reason to count the yearly investment of Vainu as profitable. We would never have been part of this deal without Vainu.

When we're managing a significant customer portfolio either in terms of the number of customers or the value, Vainu helps us prioritize them and focus our efforts on the ones that matter the most right now. Vainu's notifications help us find new opportunities to do business.

Healthcare 1–10
Read how Liikkuva Suomi taps into sales automation to free up resources.

Vainu enables us to use our time and energy more wisely. Our business figures are heading in a positive direction, and Vainu supports our journey.

Insurance 201+
Learn how LocalTapiola saved more than 1,5 million euros in less than one year using Vainu.

Our first call resolution has gone up from 75% to around 90%. Also, our contact volume has gone down about 20%, and our net benefit can be counted in millions by the end of the year. And we’re just getting started.

IT 11–50
Read how Verkkoasema has developed their outbound and inbound sales processes with great results by tapping into Vainu's real-time data.

When data moves automatically between different systems without manual work, it does not only make our work easier but improves our sales results.

I've acquired several new accounts by simply following the reports of new companies from Vainu. In this business, being the first is being the winner!"

Our time spent on prospecting has decreased by 67% from what it was before Vainu. It is now extremely easy to identify the companies with many open positions who are already using other SaaS technologies.

Online Marketing 1–10
Read how Framtidsmedia doubled its revenue and how it took only one month to get the Vainu investment back.

What's really good about Vainu, is that you can find companies that aren't that visible everywhere - hidden gems! Those are also easier to close because they haven't been contacted that heavily. For 95% of prospects that we're looking for it's much much faster with Vainu.

Automotive 11–50
Learn how Vainu helped Järvileasing to quadruple the amount of booked meetings and improved the booking hit rate.

Having a well built list of prospects makes it possible for us to scale sales easily. Vainu continuously finds us first-rate prospects and it paid off itself in only few weeks.

Get your free trial and see how we help B2B professionals discover and connect with their most potential customers.